Zero land-filling in San Francisco, to be done with mirrors

According to the recent news report “San Francsico sends 467,000 tons of MSW to landfills, of 900.000 tons generated (about 1 ton/capita). Therefore, SF landfills 52% of its MSW (plus residues from recycling and composting of the other 48%). Mayor Breed, that’s a long way from “zero landfilling”. The only way for California to stop being the nation’s largest landfilller is to complement recycling with WTE, as other states and nations have done.”

San Francisco has a goal of sending zero waste to landfills by 2020, first set in 2004 but remains off-target. The city currently sends the majority of its 900,000 tons of annual waste for reuse but it still utilizes landfills for a remaining percentage. The city has avoided using WTE facilities, instead focusing on recycling, composting, and public education programs but landfills remain. The amount of trash sent to landfills bottomed out at 367,000 tons in 2012 but the total now averages 427,000 tons. The increase comes partly from increased population and consumption and the increase of plastics and other packaging. Mayor London Breed has called for a new 2030 plan to cut all waste 15% by 2030 and reduce the waste it sends to landfills by another 50%. The city has led the way on many waste reduction and diversion strategies, including recycling and reuse of sheet metal, but advocates fear the next 50% reduction will be more difficult. 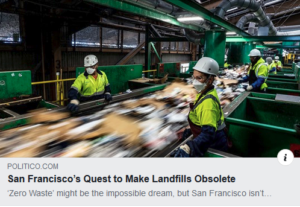