Dear National Academies, I received a complimentary copy of the above study by the NA. It is a well written and illustrated report by a committee comprised  of well known environmental faculty like Profs. Domenico Grasso of Michigan and Julie Zimmerman of Yale.
Because of my research, I was particularly interested in the section “Grand Challenge 3: Future without pollution and waste”. It contained several references to “design”, “recycling” and “anaerobic digestion” but not a single mention as to what is being done or should be done with the “post-recycling wastes”, which constitute 70% of the U.S. urban wastes and about the same of the global urban wastes.
At present, over one billion tons of the global urban wastes are disposed annually in landfills, thus consuming an estimated 100 million square meters of land and emitting over 1.5 billion tons of carbon dioxide equivalent. The NA study also does not mention that there is a technology whereby an estimated 300 million tons of post-recycling wastes are used as fuel in waste-to-energy (WTE) power plants to produce electicity and heat and, also, recover metals and construction minerals.
How is it possible for the National Academies to influence the future when they ignore totally the present?
Prof. Nickolas Themelis, Member NAE
Earth and Environmental Engineering, Columbia University 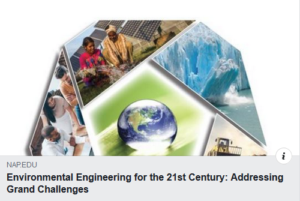